To participate in the Zoom, please complete the following form: 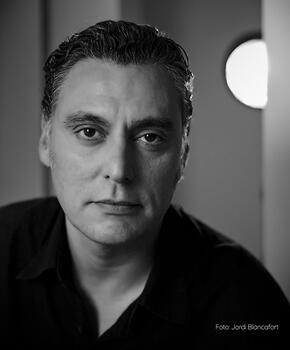 Born in Argentina in 1963, he studied journalism and art history in Buenos Aires and audiovisual techniques in Madrid. In 1986 he began his professional career as an Art Director producing covers and articles for magazines: Rolling Stone, Playboy, Cosmopolitan.

At the same time, since 1999 he started as Art Director in advertising. In early 2001 he moved to Barcelona (Spain), establishing his residence there for nine years. During 2010, he returned to his city and began a photographic reconstruction of it, which led him to develop a personal vision of the architecture of Buenos Aires.

Between the implicit geometry of the forms and an obsession for details, his visual universe reinvents the past of a cosmopolitan city. As a result of this search, he presents: "El Amante de Buenos Aires" and "República de Waires". In 2017, he participated in the exhibition "How to read the Paschal Duck" (Pacific Standard Time-Getty Foundation of Los Angeles). He received mentions in Argentina: Salón Nacional de Arte (Photography) and Bienal de Arte x Arte, among others. He currently lives between Buenos Aires and Barcelona. The renowned Brando magazine recently published a special issue with a retrospective of his work.